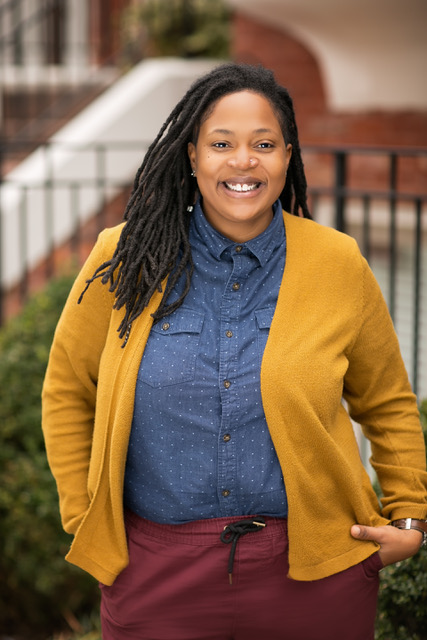 Next up in FFJ’s series of interviews with our Advisors: Mary Hooks, Former Co-Director of Southerners on New Ground (SONG) and a leader of the National Bail Out. Make sure to check out the new Until Freedom Comes Bail Out Toolkit, from the National Bail Out. We asked Mary to tell us about a recent win on bail reform with the Atlanta city council, what visionary organizing looks like, and what funders can do in this moment.

Congratulations on this week’s win on bail reform in Atlanta, Georgia! What type of organizing and coalition work did it take to make this possible? What’s next to build on this win? How is the momentum building across the country?

There were several organizations and groups that contributed to the bail reform in Atlanta. Many of the organizational relationships are years old and we have done work together in the past. We’ve been on the front lines during rapid response, done workshops and town halls, bailed out Black Mamas and broken bread together. Relational organizing has allowed us to work and struggle together. This was not the visionary policy that we envisioned, however, we did see an opportunity to move the dial on the issue and change the narrative about bail reform. Those things happened and we have some ways to go. We will be working with members of the commission to monitor and evaluate the implementation of the new policy, begin developing a needs assessment pilot, and provide a 6-month report back on the reforms. Across the country, people are being inspired by the fights that are happening to end money bail as well as the bail out actions that have been sweeping the nation since last year’s Black Mama’s Day Bail Out. Some of this is in part due to the lawsuits that are creating some urgency inside of municipalities to stop wealth-based bail systems.

Tell us more about visionary organizing. How do you think it’s different than traditional organizing or policy advocacy? Are the outcomes different?

Visionary organizing has more to do with creating the space inside of organizations to be willing to take risk than having a grand vision of the future. It’s about being able to see possibilities where it looks bleak and taking collective risk to make the impossible, possible. What is different is what it does to our hearts and minds. It opens up more space to be collectively vulnerable, to experiment, and to hope. When we engage in that type of organizing, we may not get the policies, but our lives will never be the same.

And, congratulations to you and the SONG family on the 25-year anniversary of SONG’s founding! What are some of the biggest learnings and most uplifting discoveries that you and SONG have had?

We have learned so many lessons and many of those lessons have been passed down to me and others. We are more certain that relationships are the strongest infrastructure we have and we need each other. We are clear that there is a difference between respectability and earning respect. We know that we have lasted this long because we have been nimble, we haven’t pretended to know everything, and we are as honest about our failures as we are about our successes.

What should funders be doing to support the growth of organizations and movements right now?

Listening and taking action. Over the last few years, I’ve had the opportunity and responsibility to navigate spaces where funders are convened. There are at a minimum three basic things that I have heard over and over again:

Mary Hooks joined the SONG team as a field organizer for the state of Alabama in March 2011. Her passion for helping people is reflected in her years of community service and mentoring. Mary’s background is in Human Resources and holds a Master of Business Administration with a focus in Human Resources Management and recently obtained her Professional in Human Resources (PHR) certification. Though Mary is new to organizing, her personal story has prepared her for such a time as this. The chapters of her life begin with a life of poverty, being parentless, and shy. Eventually the story unfolds of a rebellious teenager who converts to a devoted Christian in Pentecostal church, who comes out as a lesbian and left without the support of her foster or church family and stricken with tons of Christian guilt. The climax of this story occurs when, in undergrad at a private Lutheran college, Mary begins to redefine her self and discovered a radical desire to be a catalyst for change in the world. Since then Mary has relocated to the hot shades of Atlanta, GA, and has found her niche in organizing with SONG, throwing dope parties and singing with the Juicebox Jubilees, a queer choir, created to provide a safe space for folks to gather their voices together, sip a little wine, and sing songs that uplift, inspire, and liberate. As she continues to navigate through movement work, she hopes that the folks she connects with are inspired to write their stories of self-determination, liberation, and love. You can reach Mary at mary@southernersonnewground.org

In the spring of 2017, Funders for Justice (FFJ) launched its inaugural cohort of Movement Advisors – nine field leaders recognized for their leadership in community power-building, racial and gender justice, police accountability campaigns, and anti-criminalization movements. We asked them to share their insights on the current political climate, how we can build a vision for the world we want, and what funders can do in this moment.