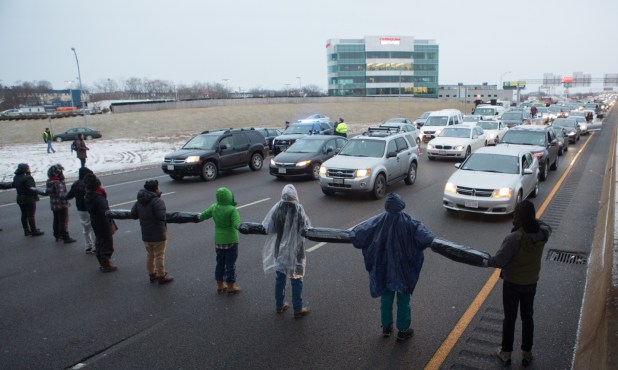 On January 15, 2015, A non-Black group of Pan-Asians, Latinos, and white people, some of whom are queer and transgender, linked their bodies together across the I- 93 highway in a highly coordinated action in Boston. This act of civic participation was in solidarity with the Black Lives Matter movement and Black people. Here is the solidarity statement:

Let us also remember: The liberation of Black people is not an abstract, unattainable ideal. Black lives matter today and always– it’s a fact.

Today, January 15, 2015, we, a non-Black group, stand in solidarity with Black Lives Matter movement and Black people everywhere. Our non-Black solidarity group of Pan-Asians, Latinos, and white people, some of whom are queer and transgender, uplifts Black voices, as expressed at fergusonaction.com/demands.

We hold ourselves accountable, as non-Black people, to turn up and disrupt business as usual. Today, our nonviolent direct action is a manifestation of our long-term commitment to confronting our nation’s racist power structure as part of achieving the liberation of all oppressed people, always by uplifting and centering Black liberation. We expose the reality that Boston is a city where white commuters and students use the city and leave, while Black and Brown communities are targeted by police, exploited, and displaced.

As non-Black Latinos and Pan-Asian people in the United States, we refuse to perpetuate anti-Black racism. We will no longer allow our communities to serve as a wedge to divide us and jeopardize our struggle to end racism and achieve our collective liberation.

As non-Black undocumented immigrants in the United States, we refuse to perpetuate the erroneous idea of earned citizenship. We honor the path set before us by Harriet Tubman by advancing the civil and human rights of everyone regardless of citizenship status.

As non-Black women, transgender, and gender non-conforming people in the United States, we refuse to allow our commitment to gender justice to distract us from racial justice. We understand that gender and racial justice are intertwined.

As non-Black lesbian, gay, bisexual, and queer people in the United States, we refuse to allow our increasing acceptance of our sexuality and several marriage equality victories to end our commitment to social justice. This movement has been spearheaded by the leadership of Black queer women and gender non-conforming people, as is today’s Black Lives Matter movement.

As white people in the United States, we refuse to align ourselves with a state that carries out violence against Black people. We are taking nonviolent direct action to challenge white complicity and amplify the demands for an end to the war on Black people.

Today, we put our individual and collective voices together to resist and disrupt business as usual, the way we have been used to maintain a system that oppresses Black people. Moreover, as non-Black people, we understand and accept our duty to end the profiling, unjust incarceration, and killings of Black people in the United States and beyond. Black lives matter, today and always.